Welcome to LBC! For over 330 years, we’ve been gathering here in Lymington – a beautiful little town between sea and forest – to learn about God and point people to Jesus.

Maybe you’re new to Christianity and wondering why we talk so much about this man called Jesus. If so, please come and find out more. We’d love to hear what you think and explain what we believe and why. You could join us on a Sunday – our monthly Second Sunday service is particularly geared towards people who don’t usually find themselves in church. Or you might like to try a short course exploring life’s big questions and what it means to be a Christian.

Perhaps you’re new to the area, or just visiting, and searching for local churches. We’d love to meet you too. Our regular Sunday service is at 10.30am. You’ll find a full programme of groups and activities for children and young people, with Messy Church every second Sunday of the month from 9am (starting with breakfast). Our regular services are informal and welcoming. We begin with prayer and worship (usually a mix of contemporary songs and classic hymns), before opening the Bible together to hear God’s Word explained and applied: you can listen to our latest sermons here.

There’s a lot happening in the week too. Prayer is a central part of life at LBC; we have four regular prayer meetings across Mondays, Tuesdays and Wednesdays. Most of our regulars also join a midweek small group for prayer and Bible study – the two main ones are Core groups (for two or three people) and Connect groups (for larger gatherings).

We run a weekly playgroup ‘Hullabaloo’for babies, toddlers and their carers.

We also run regular talks-and-activities groups for the over-50s and a social group with an arts and crafts focus.

Whatever stage you’re at with your life and faith, you’ll find a warm welcome here at Lymington Baptist Church. We hope to see you soon.

Whatever stage you’re at with your life and faith, you’ll find a warm welcome here at Lymington Baptist Church. 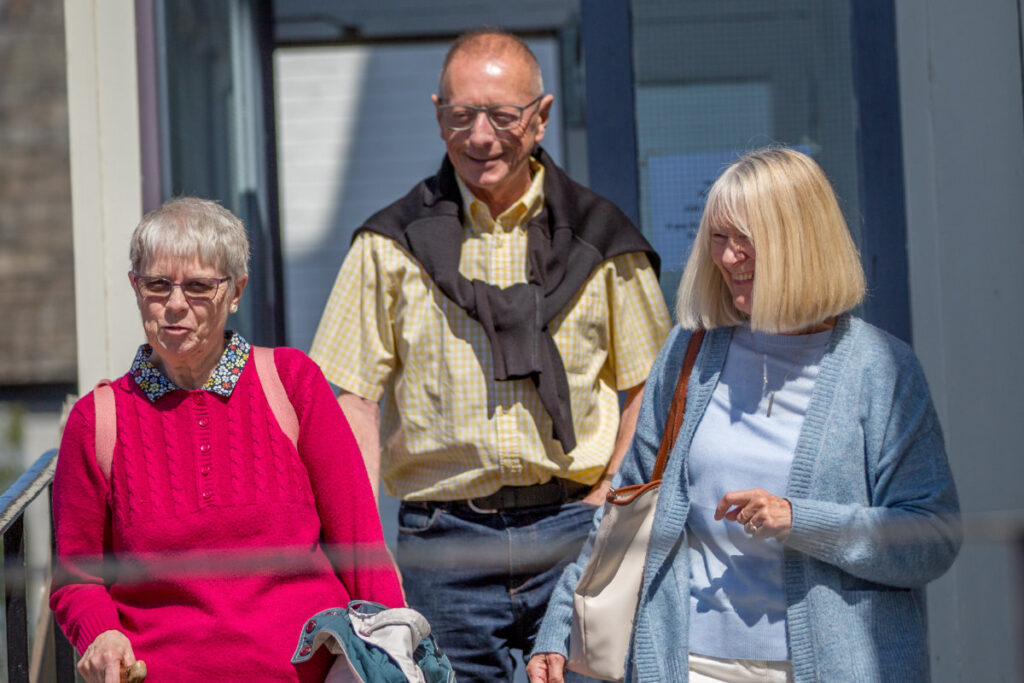 Our main church building is on New Street, just off the High Street. (Lillington House, the house next door, is our office building.) Click here for the contact details.

What do we believe? Find out more about LBC’s vision and values.

What happens in services? Find out what a Sunday service looks like.

God has blessed LBC with a long and rich history in Lymington. We first opened our doors (officially at least… read on!) in 1688, two decades before they completed work on St Paul’s Cathedral. We feel blessed and grateful to be here well over three centuries later, still following Jesus and aiming to make Him known in your fantastic community.

A little bit of LBC history

1688 is when it all started for Lymington Baptist Church. Before that time, local Baptist Christians had to meet in secret because they were ‘non-conformists’: this meant they refused to be members of the Church of England, arguing that Jesus Christ, not the king, was the head of the church. As an LBC historian put it nearly a century ago:

“After much investigation and careful consideration[…] we have come to the conclusion that a heroic band of loyal baptised believers existed in Lymington long before the date given (1688). In order to protect themselves from the informer and the persecutor, our Baptist ancestors had to keep secret their records and places of meeting.”

So in the earliest days of LBC, there was no church building. The believers simply met in each others’ houses. When it came to baptism they had to go to Hatchett Pond, near Beaulieu. Presumably they avoided baptism in the winter!

Holding to Baptist theology was very challenging in the early 1600s. In 1664, the famous London preacher Benjamin Keach was arrested, pilloried and jailed for his views on baptism. Everything changed in 1689, however, when Parliament permitted freedom of worship with the Act of Toleration. Twenty-four years after his imprisonment, Keach found himself travelling to Lymington to ordain the Rev John Rumsey as LBC’s first official pastor.

In fact the church had started meeting openly in Lymington the year before – initially in a house on Captain’s Row, near Lymington quay. But by 1769, they were ready to set up a more permanent church building. The minister at that time, Rev Joshua Thomas, travelled to London to see if he could acquire a loan for the build. The poor man stayed the night in a damp bed in Portsmouth on his way back and died! He was buried after a funeral in the newly completed church on New Street, which is where you’ll find us today.

In 1834 that church building was demolished and a new, much bigger one was built on the site. It cost £1,625, which is equivalent to £210,000 today. This building included a day school in the rooms below the main church, which could hold 140 children. The school later transferred to the new National School, in the building directly opposite us (now the St Barbe Museum and Art Gallery).

When Spurgeon came to Lymington

Many people assume our present pastors are the most famous people ever to speak at LBC*, but that honour actually falls to Charles Haddon (CH) Spurgeon, the celebrated 19th century Baptist minister. Spurgeon (1834-1892) is one of the great names in modern evangelicalism, a prolific author, sensitive pastor and magnetic speaker. Known as the “Prince of Preachers”, he is still widely read and admired today. In June 1863, church minutes indicate that CH arrived in Lymington to preach two sermons here. The crowds were so large that a pop-up “booth” was constructed in a nearby field to accommodate them, at a cost of around £25. “The building was capable of holding nearly 3,000 persons, and was well filled in the afternoon and crowded in the evening,” the notes recall. “The services appeared to excite a very lively interest, and many fervent prayers were offered that the preacher might be ‘mighty through God’.” Spurgeon seems to have maintained ongoing links with LBC; our 13th pastor, J. J. Fitch, was recommended by him, and Rev Fitch was followed in 1879 by Rev John Collins, another product of Spurgeon’s ministry. The great man’s diaries indicate that he returned to the New Forest in 1873 for a writing holiday, this time incognito. He hiked the woods with friends (“We have been through Bolder Wood and Mark Ash, and seen the most wonderful forest scenery I ever beheld or even dreamed of.”), toured Beaulieu Abbey, had his portrait snapped (“I like the photograph better than any portrait ever taken of me”) and took the steamboat from Lymington Quay to Yarmouth, where he watched porpoises from the beach. All the while he “sowed the region well” with gospel leaflets and peppered his travelogue with thoughts about God:

“We have roamed in the wood for two hours, and have never seen a soul. Birds, rabbits, flies, ants and spiders have been our only company, save the ONE with whom we have held sweet converse, and of whose Word we have spoken to each other…”

Sixth pastor William Giles went on to open a school in Chatham, Kent, which was attended by a young student called Charles Dickens. Dickens would later use Giles as the inspiration for teacher Mr Feeder in Dombey and Son.

The congregation temporarily split in 1791 when seven members left to form a new church in town. They were reunited 18 years later, “after much discussion and correspondence.”

LBC preachers often visited the Forest to preach the Word to rural villagers. Besides holding open-air baptisms at Hatchett Pond, meetings were held in a barn in Beaulieu and a mud-wall chapel in Sway, hand-built by members.

God has blessed LBC with strong growth over the years. Under seventh pastor James Millard (1818-1853), church membership rose to 130, while the Sunday School had 400 youngsters on its books. During that period, a further 34 members left to plant a new church at Blackfield Common.

The land adjacent to the church used to be a burial ground. Around 150 members, including several ministers, were interred there from the late 1700s. It was officially closed by the Home Office in 1859 and levelled to create a car park in 1976; youth club members helped to relocate the headstones to the perimeter wall.

LBC’s youth ministry has seen extremely dedicated service over the years. William Robinson led the Sabbath School for 50 years until his death in 1870. He was pipped four decades later by Ann Day, who in 1904 received a long service medal for over 53 years’ work with the church Sunday School.

The modern Baptist movement was born in the 17th century and is now a worldwide denomination with many millions of Christian believers. How did that happen? Here’s a quick crash course (adapted from a timeline at Baptists Together).

1612 The first Baptist church met in Spitalfields, London. Thomas Helwys, a founder of the Baptist denomination, publishes A Short Declaration of the Mystery of Iniquity, one of the first books to call for religious liberty.

1689 Parliament passes the Act of Toleration, allowing freedom of worship.

1812 A group meets in Dr Rippon’s Vestry, London, to discuss the formation of a Baptist Union.

1832 The Baptist Union completes its formation.

1855 ‘The Freeman’ (now known as The Baptist Times) publishes its first edition.

1912 The Baptist Union creates the Sustentation Fund (now known as Home Mission), aimed at uniting churches to raise money for mission around the UK.

1922 Violet Hedger becomes the first woman to qualify as a probationer minister.

1942 The Baptist Union becomes a founder member of the British Council of Churches.

1955 The BWA celebrates its 50th anniversary Congress in London.

1998 The BUGB adopts the Five Core Values involved in being a ‘gospel people’: a prophetic, inclusive, sacrificial, missionary and worshiping community.

2013 The Rev Lynn Green is voted in as the first woman General Secretary.

Lillington House, now the church office, has a surprisingly biodiverse past. Built next to an old “stable coach-house and yard”, it was still being used for donkeys and carts in the early 1900s by its then tenant (whose name was Mr Fish). In the 1940s it was occupied by Harold Tuckerman, a Devonshire shepherd’s son and dairy farmer who used the stables to keep 400 rabbits for showing and breeding. He later bought the building and converted it into a milk emporium called Lillington Dairy (“the clatter of milk churns and bottles could be heard during Sunday morning services”). To our knowledge, there are no strong animal connections today – although the previous Lead Pastor’s dog, Henry, was known to be an occasional visitor.